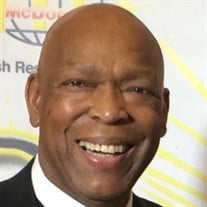 Marvin Leroy Keyes was the youngest child born to the late Doris Mae Huggins (Keyes) on February 18, 1947 in North Newport News, VA. Leroy, as he was affectionately called by his family and friends, was born on the same day as his older sister... View Obituary & Service Information

The family of Marvin Leroy Keyes created this Life Tributes page to make it easy to share your memories.

Marvin Leroy Keyes was the youngest child born to the late Doris...