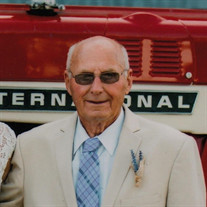 Marvin Lee Roberts, 91, of Lafayette, Indiana passed away on January 13, 2021 due to the lingering after effects of Covid 19. Marvin was born in Remington, Indiana, on August 8, 1929 to the late Wilbur and Edna (Kinsell) Roberts. He married his high school sweetheart, Norma Herath on April 12, 1952. She preceded him in death on December 17, 2009. Also preceding him in death in 2011 was his eldest daughter, Debbie Miller. Marvin was a graduate of Remington High School. Marvin proudly served our country during the Korean War as a Corporal in the U.S. Army from May of 1952, until February of 1954. He was stationed in Stuttgart, Germany. Prior to being drafted into the Army, Marvin started farming in 1947. Upon returning from serving his country, Marvin got right back into farming. Farming was his passion. He absolutely loved everything about it. If you’ve ever heard Paul Harvey read the story of (So God Made a Farmer) he had to have had Marvin in mind. Marvin farmed his entire adult life for a total of 71 crops. For the last 40 years he farmed alongside his eldest son and daughter-in-law (Marshall and Becky Roberts.) He was also extremely mechanically inclined. He loved working in the shop and getting equipment ready for the field. Marvin looked forward to and enjoyed the weekly Sunday dinners that Becky, Lacey, and Torey would provide. He loved being all together around the dinner table. Surviving are two daughters, Carmelita Sherer (husband, Devon) of Cicero, Indiana; Cheryl Dimmitt (husband, Jack) of Ogden, Utah and two sons, Marshall Roberts (wife, Becky) of Lafayette, Indiana and Dennis Roberts (wife, Carol) of Goodland, Indiana. Also surviving are 10 grandchildren and 12 great grandchildren. Due to Covid 19 there are no services scheduled at this time. Share memories and condolences online at www.hippensteelfuneralservice.com

Marvin Lee Roberts, 91, of Lafayette, Indiana passed away on January 13, 2021 due to the lingering after effects of Covid 19. Marvin was born in Remington, Indiana, on August 8, 1929 to the late Wilbur and Edna (Kinsell) Roberts. He married... View Obituary & Service Information

The family of Marvin Lee Roberts created this Life Tributes page to make it easy to share your memories.

Marvin Lee Roberts, 91, of Lafayette, Indiana passed away on...