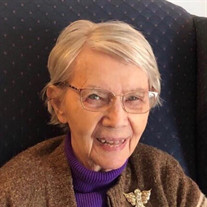 Mary Geraldine "Jeri" (Shepard) McKinney, age 89 of Lafayette, passed away 11:05 pm Monday,June 24, 2019 in Greenwood, IN at her daughter Miriam’s home, where she had been living since December. Jeri was the daughter of Sherrill and Ella Shepard, born February 16, 1930 in Indianapolis. She graduated from Shortridge High School in 1947, attended Heron Art Institute, Marion College and continued taking classes and courses throughout her life. Jeri with her children lived in Attica from 1966 to 1978. She created and sold advertising for the Attica Ledger Tribune and was one of the original founders for the Potawatomi Festival. She married Donald R. McKinney on Saint Patrick’s Day, March 17, 1983, in Lafayette. He preceded her in death on November 21, 2014. Jeri was known for many things; her artistic abilities, through her paintings, knitting, drawings, writing, her love for gardening, joy of cooking and for having thirteen children. She volunteered with Kids First as a puppeteer for many years and knitted caps for cancer patients. Surviving are a son: Paul (Arla) Green of Lafayette, Eleven daughters: Veronica (John) Brand of Utah, Edythe Marshall and Stephanie McCalley both of Indianapolis, Theresa (Bob) Fischer, Jenniffer (James) Dickensheets, Cecelia (Dore) Evans, Liz (Larry) Morris, Celeste (Charles) Tyner, Tish Woods all of Lafayette, Sheila Tate of Brownsburg and Miriam (Marcus) Smith of Greenwood: a sister: Sherrill Oberlies in Florida, 19 grandchildren, 19 great grandchildren, 4 great great grandchildren along with several nieces and nephews. She was preceded in death by her parents, her husband, a son Special Forces Sgt. George Curtis Green Jr., MIA, KIA, BNR., a sister Susan Barker, 3 granddaughters, 1 great granddaughter and 3 son in-laws. Funeral service will be held 1pm Friday, June 28, 2019 at Hippensteel Funeral Home with visitation being from 11am to 1pm. Interment to follow at Tippecanoe Memory Gardens. In lieu of flowers, memorial contributions may be directed to Kindred Hospice of Greenwood IN. Please share memories and condolences online at www.hippensteelfuneralservice.com

Mary Geraldine "Jeri" (Shepard) McKinney, age 89 of Lafayette, passed away 11:05 pm Monday,June 24, 2019 in Greenwood, IN at her daughter Miriam&#8217;s home, where she had been living since December. Jeri was the daughter of Sherrill and... View Obituary & Service Information

The family of Mary Geraldine "Jeri" McKinney created this Life Tributes page to make it easy to share your memories.