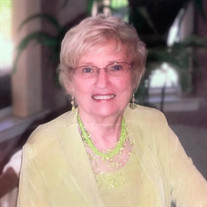 Maryanna E. Baker, of Lafayette passed away Monday, November 23, 2020 in Belleair, Florida. She was born March 10, 1925 in Logansport, Indiana and was the daughter of Raymond L. and Gladys I. Etnire. She was a graduate of Logansport High School. On March 5, 1944, she married Dale F. Baker at St. Luke’s Lutheran Church in Logansport. He preceded her in death on May 27, 2016. Theirs was a love of devotion and enduring companionship. Maryanna, a violinist, played in the symphonies of Tyler, TX, and Lafayette, IN during her residencies of each of these cities. She worked as a receptionist and secretary for Banks in Logansport and Lafayette. She was front desk office manager for Dr. Richard L. Fisher, Periodontist, in Lafayette and later when he moved his practice to Indianapolis. She also worked several years for the Soil Division of the I.D.N.R as a payroll clerk and secretary. She enjoyed traveling, dancing, music and fishing trips with her husband to the Great Lakes and Canada. She suffered with Alzheimer’s disease since the age of 82. She was known and respected as a very loving and caring Mother and Grandmother. She is survived by her son, Bradley Ray Baker of Firestone, CO, and daughter Rhonda Rae Cattell of Belleair, FL; sister Lois Gillespie of Indianapolis; five grandchildren, nine great-grandchildren and five great-great-grandchildren. She was the firecracker of our family and she will remain that sparkle in our lives. Visitation will be held from 1pm – 2pm Wednesday, December 9, 2020 at Hippensteel Funeral Home. Private family service will begin at 2pm with Reverend David French officiating. Interment will follow at Tippecanoe Memory Gardens in West Lafayette. Current Covid-19 precautions will be observed along with social distancing and current government attendance guidelines. Masks are required. In lieu of flowers, donations can be made to the Alzheimer’s Association. Share memories and condolences online at www.hippensteelfuneralservice.com Musical History – I began violin lessons on a ¾ size violin at age 7, approximately. It had been bought for Betty Jean, my deaf cousin in see if she could distinguish vibrations to know intonation. Later I advanced into a full size violin, which was in the family, and I still have it. Louis Durflinger was my teacher after having had the opportunity to have a school violin and school lessons during the late elementary years. This was in the m’30’s and just coming out of the depression. Durflinger walked to his students’ homes for private lessons, that cost Dad .30 a half hour. Later I was able to get a full hour lesson for .50. Durflinger later became the Jr. High School Orchestra teacher. In Junior High, they had “contests” weekly to over-throw the next higher seated person. I became first chair for 8th and 9th grade and never lost it. In high school, we competed state-wise and for 3 years, under Bill Morocco and Louis Durflinger, we won first place. I also played in a trio and we won first place. I still have my metal from State that I won. On Sundays, I played in a small orchestra a Sunday School, for several years. During this time, I almost lost Carmichael. Logansport churches were hit with thieves who came during the church service and tool musical instruments left in the Sunday School. They either dropped or threw my violin and it was broken badly. My Dad sent it to Chicago for repairs, but it never had the great “solo” tone as before but was more for orchestra playing. After high school, and living at home, I continued to play in a trio. We played at weddings, funerals, and other events. I wanted to go to a music school (Jordan’s) but it was too expensive for my parents, more important, I had met Dale. We married and moved to Lafayette where Dale went to Purdue. At that time, they had an opportunity for veteran’ wives to play in the Purdue Orchestra. So, for 4 years I had that opportunity. Then I joined the Lafayette Symphony and had a great opportunity to play with members of the Indianapolis Symphony. During this time, I also had the opportunity to “fill in” once in the Inpls Symphony when they were scheduled for concert in Lafayette. Later I tried teaching ---it wasn’t my profession! So, I gave it up. Either I didn’t have patience or the young students didn’t have any ability. Now I struggle to get my ability back up to par, but I enjoy the challenge. I don’t have my Mom anymore to accompany me on the piano. She never had a lesson in her life, but was very accomplished and did a fantastic job of it. I treasure those days. My violin was named “Carmichael” from day one. Why, I don’t know. But even to-day I speak of Carmichael and also have met people from my past that have asked if I still have Carmichael. I still keep Carmichael in tune and when Dale is gone for an afternoon, I will again pick him up and play ---ending with a sigh and determination to practice and get back into shape. A lot of memories of wedding, showers, funerals, Sunday morning church solos, orchestra and rehearsals. But the most important event was when Mom and Dad came down to Lafayette to see me in first chair and Inpls Symphony members in the orchestra, and they met me after the performance with tears in their eyes as it was worth all the years of finding that .05c as week for lessons. Click on the link below to watch the webcast for Maryanna Baker. https://webcasts.lifetributes.com/1106086 http://videos.lifetributes.com/1106086

Maryanna E. Baker, of Lafayette passed away Monday, November 23, 2020 in Belleair, Florida. She was born March 10, 1925 in Logansport, Indiana and was the daughter of Raymond L. and Gladys I. Etnire. She was a graduate of Logansport High School.... View Obituary & Service Information

The family of Maryanna E. Baker created this Life Tributes page to make it easy to share your memories.