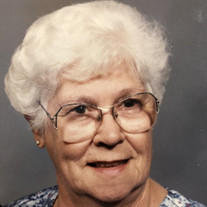 Nesta Price Jones Reseigh, age 99, died peacefully January 18, 2021 at St. Anthony Healthcare, Lafayette, Indiana. Nesta was a loyal wife, mother, grandmother, and great-grandmother, who enjoyed reading, needlework, cards and games, and travel. Nesta retired from the business office of Mercy Hospital, Elwood, Indiana, in 1986, after which she worked as a home healthcare aide and for many years as a nanny. After moving to Lafayette, Indiana, she became a dedicated volunteer at St. Elizabeth Hospital Gift Shop and Glen Acres Elementary School. Nesta was a 77-year member of Eastern Star. A devout member of the United Methodist Church, she was active throughout her life in the choir, Sunday School, Bible studies, and United Methodist Women, having been president for many years. Nesta was born June 15, 1921, in Helston, Cornwall, England, and emigrated briefly to Windsor, Ontario, Canada, then across the river to Highland Park, Michigan, in 1929. Her parents were the late Hugh Price Jones and Ida Chegwidden Jones. Nesta was preceded in death by her husband of 26 years, William Reseigh (in 1967), her sister Dorothy Stevens, and brother E. Hugh Jones. She is survived by her brother and sister-in-law Richard and Sharon Jones, her children and their spouses Donna (Timothy Long), William (Melanie), and David (Susan), three grandchildren Jessica, Miranda, and Andrew Reseigh, and two great grandchildren, Mavrick and Malachi Reseigh, as well as her cherished friends, the Moser family. Following her wishes there will not be a visitation. Family members will hold a private service and memorial at a later date. Share memories and condolences online at www.hippensteelfuneraleservice.com

The family of Nesta Reseigh created this Life Tributes page to make it easy to share your memories.