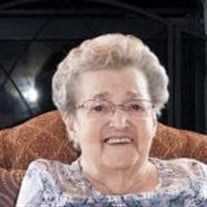 Norma Jean “Kiddo” Wilson McIntosh, age 91, of West Chester, OH formerly of Lafayette, IN passed away at 11:50pm on Tuesday May 12, 2020 at Hospice of Cincinnati. Born on January 24, 1929 in Hickory Grove Township, IN. She was the daughter of the late Clifford R. Wilson and Bessie L. (Buck) Wilson. She graduated from Ambia High School in Ambia, IN and Indiana University in Bloomington, IN with a degree in Dietetics. She honorably served in the US Army from 1952-1954 as a Second Lieutenant. She married David Eugene (Mac) McIntosh on October 9, 1952 in Ambia, IN and he preceded her in death in 2017. Jean retired after 33 years from West Lafayette School Corporation as Head of Food Services. She was a member of American Legion Post #11 and volunteered with Area VI Council on Aging. She enjoyed summers fishing in Minnesota and wintering in Texas for over 20 years. She loved being in the kitchen cooking from scratch for her family and friends. Her hobbies included sewing, cross stitch, crocheting, reading and gaming. She supported many area philanthropic organizations. Her favorite pastime was spending time with grandchildren and greatgrandchildren. Those who loved her most called her Kiddo which are her children: David M. McIntosh (wife Julie), of Rochester, NY, Diane Sherman (husband Don) of Marble Falls, TX and Dawn Thurnauer (husband Gary) of Cincinnati, OH; a brother Walter R. Wilson of Covington, IN; seven grandchildren: Daniel McIntosh (wife Erin), Claire Meraz (husband Bryan), Jennifer Tracey (husband Austin), Amanda Varenhorst (husband Aaron), Allison Santillan (husband Abraham), Charlotte Thurnauer (fiancé Nate Lange), Bryan Thurnauer (fiancé Cassidy Howard) and seven great-grandchildren: Summer Maley, Eliza McIntosh, Brynn and Lennan Meraz, Archer and Ava Varenhorst and Emma Santillan. She was preceded in death by her parents and seven siblings Marie Courtney, Dale Wilson, Irene Ulm, Donald Wilson, Gerald Wilson, Judith Wilson and Tom Wilson. A Memorial Visitation will be held on July 17,2020 from 5 PM - 8 PM at Hippensteel Funeral Home in Lafayette, IN. IN lieu of flowers, memorial contributions may be made to Area IV Council on Aging in Lafayette, IN. Share memories and condolences online at www.hippensteelfuneralservice.com http://videos.lifetributes.com/1076671

The family of Norma Jean McIntosh created this Life Tributes page to make it easy to share your memories.