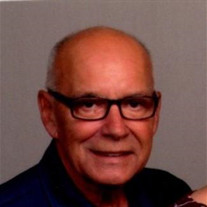 Paul Joseph “Joe” Beeler, 64, of Lafayette passed away on Thursday, February 13, 2020 at Simon Cancer Center in Indianapolis. He was born on November 10, 1955 in Lafayette to the Late Edgar and Pauline (Humphrey) Beeler. Joe graduated in 1974 from Wainwright High School. He proudly served in the United States Air Force and was a member of the Moose Lodge in Lafayette. He worked as an industrial carpenter for 30 years. After retiring from the union, he then worked at Purdue University. His first marriage was to Terri Budewitz and she preceded him in death November 18, 2000. In 2003 he met his current wife, Tammy Blanchard, and they, were together for 16 years before they married on December 7, 2018. Joe truly enjoyed the outdoors by riding his motorcycle, camping, gardening and golfing. He loved to go on road trips. He is survived by his wife, Tammy and his daughter, Maureen Beeler and son, Aaron Beeler of Lafayette; step-son, Ryan (Amy) Monk of West Lafayette and step-daughter Amber (Abel) De Leon of Rossville; two brothers, Gary (Fran) Beeler of Lafayette, IN, Steve (Sandy) Beeler of Bokeelia, Florida and sister Cindy (Companion Larry) Beeler of Stockwell, IN. Also surviving are 13 grandchildren of the 13 grandchildren, there were 2 in which he raised Isabelle and Christopher. He is preceded in death by his parents and his first wife Terri. A Memorial Visitation will be held from 3 pm – 4 pm on Monday, February 17, 2020 at Hippensteel Funeral Home with a memorial service to follow at 4 pm. In lieu of flowers, memorial contributions may be directed to the family for expenses. Share memories and condolences online at www.hippensteelfuneralservice.com. http://videos.lifetributes.com/1054589

Paul Joseph &#8220;Joe&#8221; Beeler, 64, of Lafayette passed away on Thursday, February 13, 2020 at Simon Cancer Center in Indianapolis. He was born on November 10, 1955 in Lafayette to the Late Edgar and Pauline (Humphrey) Beeler. Joe graduated... View Obituary & Service Information

The family of Paul "Joe" Beeler created this Life Tributes page to make it easy to share your memories.

Paul Joseph “Joe” Beeler, 64, of Lafayette passed away on Thursday,...