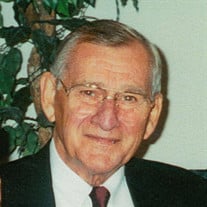 Paul J. Post, Jr., 83, of Lafayette, Indiana, passed into the Lord’s hands on March 18, 2019 in Lafayette. Paul was born in Boston, Massachusetts to Paul and Ann Post on May 13, 1935. While attending the University of Massachusetts, he met his love, Barbara. They married on June 20, 1959 in Holyoke, Massachusetts. Paul completed his MBA at the University of Maryland and embarked on a career in management across several industries. He retired in 2000 as Vice President at Andover Industries, a division of Card Industries, but continued working part-time until 2008. Paul and Barbara worshipped at the parish of Blessed Sacrament in West Lafayette, Indiana. He was active in the Lafayette chapter of the International Rotary network and helped the Salvation Army with fundraising activities. As a member of the John Purdue Club, Paul took Barbara to Purdue Women’s basketball games and avidly followed Purdue football. He looked forward to the musical talents of Purdue bands at half-time. Paul and Barbara shared many worldwide travel adventures. He enjoyed a glass of a good Chardonnay and was a talented chef at the grill. Paul’s greatest joy was being with his family. Paul is preceded in death by his parents and his granddaughter Julianna. He is survived by his wife, Barbara, and his children, Thomas (Lisa) Post and Theresea (Robert) Chapman and his sister June Bristow. His grandsons Jason, Joshua, Matthew and Brian, and great-granddaughter, Emily will miss him. Paul exemplified what it means to be a good disciple of Christ. He touched many lives with his kindness and generosity and will be remembered for his humor and his love. ‘Well done, good and faithful servant.’ Matthew 25:23. A private family service will be held in Michigan followed by interment at Michigan Memorial Park in Flat Rock, MI. Memorials may be given in Paul’s honor to the St. Matthew 25 Care & Share Soup Kitchen at the St. Ann Parish of Lafayette, Indiana. The family of Paul extends sincere thanks to the palliative care physicians and nurses at Franciscan Health Lafayette East for their compassion and support. Share memories and condolences online at www.hippensteelfuneralservice.com

Paul J. Post, Jr., 83, of Lafayette, Indiana, passed into the Lord&#8217;s hands on March 18, 2019 in Lafayette. Paul was born in Boston, Massachusetts to Paul and Ann Post on May 13, 1935. While attending the University of Massachusetts, he... View Obituary & Service Information

The family of Paul J. Post Jr. created this Life Tributes page to make it easy to share your memories.