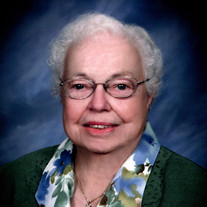 Phyllis Louise Bryant of West Lafayette, formerly of Delphi and Indianapolis, passed away on Sunday, June 14 at Franciscan St. Elizabeth’s Hospital. Phyllis was born on April 10, 1926 to the late Kenneth Emerson Sheldon and Edna May (Mosier) Sheldon. Phyllis was a graduate of Arsenal Technical High School in Indianapolis and of Indiana University. She married Robert J. Bryant in 1947. While in Indianapolis, Phyllis returned to her alma mater, Arsenal Technical High School, as a teacher in the Business Education Department. Bob later accepted a position at West Lafayette High School, and the two moved to the Lafayette area in 1968, where Phyllis began teaching at Klondike High School and finally Harrison High School until she retired in 1988. During their more than fifty years together Bob and Phyllis were true partners, whether fishing and camping, building a storage barn on their property in Delphi or traveling the world. Despite the loss of her beloved husband in 2000, Phyllis continued to thrive, playing tennis until the age of 89 with a group of women who became treasured friends, attending Camp Bluebird as a two-time cancer survivor, continuing her world travels to places such as Hawaii, Alaska, Australia, South Africa, Greece, Turkey and France, and participating in many activities at Westminster Village where she resided for the past four years. Phyllis was a devoted lifelong member of the United Methodist Church and was a member of Heritage United Methodist Church and subsequently Brown Street United Methodist Church. She is survived by her daughters and their husbands, Rebecca Bryant and Wayne Lebowitz of Boston, MA and Cheryl and Eric Wolf of Wilmington, NC. Her intelligence, wit and can-do spirit will be greatly missed by her family and by the many students, friends and neighbors whose lives she touched during her 94 years. Visitation will be held from 1pm – 2pm Wednesday, June 17, 2020 at Hippensteel Funeral Home. Funeral service will begin at 2pm with Pastor Ryan Traeger officiating. In lieu of usual remembrances, contributions may be directed to the Brown Street United Methodist Church or American Cancer Society. Share memories and condolences online at www.hippensteelfuneralservice.com

Phyllis Louise Bryant of West Lafayette, formerly of Delphi and Indianapolis, passed away on Sunday, June 14 at Franciscan St. Elizabeth&#8217;s Hospital. Phyllis was born on April 10, 1926 to the late Kenneth Emerson Sheldon and Edna May (Mosier)... View Obituary & Service Information

The family of Phyllis Louise Bryant created this Life Tributes page to make it easy to share your memories.

Phyllis Louise Bryant of West Lafayette, formerly of Delphi and...