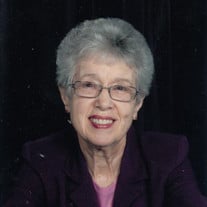 Beloved wife, mother, grandmother and great-grandmother, Phyllis Jean (Bryant) Ball Watson, 92, passed from this life in to Eternity, June 8th, 2021. Born March 26th, 1929, on a farm in Lawrence County, IL, Phyllis was the first child of Arthur and Esta (Thrash) Bryant. It was during her early years that she became involved with the Girl Scouts and developed a life long love of reading. Phyllis moved with her family from Illinois to West Lafayette in 1943. She attended Klondike High School, graduating in 1947. During that time, she was very active in 4-H, receiving a purple ribbon (champion) for her entry in the clothing division in the Tippecanoe County Fair. She went on to compete at the state level. Phyllis entered Purdue University in the Fall of 1947, obtaining a Bachelor's degree in 1951 from the School of Home Economics in Fashion Merchandising. While at Purdue, she was elected president of Shoemaker Co-op and participated in extracurricular activities including the Folk-a-Whirlers, Harlequin Club, SCA, Town Girls Club and the Wesley Foundation. Phyllis met her first husband, James Seymour Ball, (also a Purdue student) in 1948 as they were both attendants in a mutual friend's wedding. After graduation she moved to Columbus, Ohio, and worked for Lazarus until she and Jim's wedding on May 3rd, 1952, in West Lafayette. The newlyweds moved to Wadsworth, Ohio. Between 1954 and 1959, Phyllis and Jim had four children. Sadly, Jim passed away in June of 1961. Phyllis moved back to West Lafayette with her four to be near her parents and her brother's family. Dedicated to providing for and raising her young family, she worked part-time in the Audiology and Speech department at Purdue, eventually moving to the Dean of Student's office. Wanting to have the same hours as her school aged children, Phyllis began working as an Assistant librarian for the West Lafayette Public Schools. Mrs. Ball was known by several generations of students for “not putting up with any nonsense” in the library and making sure one “always asked a good question”. During summer breaks, the Ball family took multiple vacation trips. Visits to extended family on the East Coast, Florida, the Colorado Rockies, and special trips to the 1965 World's Fair in New York and Expo '67 in Montreal were some of the highlights. There were many weekend fishing excursions and month long camper vacations as well. Remarkably, while working full time and managing a household, Phyllis managed to make it to practically every athletic game or performance that involved her children. She also took time to host bridge games with other single moms, take long walks with her best buddies, Angie and Judy, garden, knit, and make her famous cinnamon bread. That bread was gifted to many and friends of friends have enjoyed having her recipe to include in their own family traditions. Phyllis had an uncanny ability to remember everyone's birthday and anniversary. She loved sending cards and letters, not just to family, but to all the friends she had gained along the way. She truly didn't ever meet a stranger; they were just a friend she hadn't gotten to know well yet. Anchored by her faith in God, Phyllis was a long-time member of Federated Church. She was part of the Shepherding ministry and took bulletins and copies of the service to those who could not get to church. She gave rides on Sundays to several of her friends who could no longer drive, and always enjoyed meeting friends for lunch after church at Christos. Phyllis was the consummate caregiver, always reminding friend or acquaintance to, “Take care of yourself, please”! and, “Stay healthy and happy”! While working part-time at a Hallmark store, Phyllis was introduced to the manager's older brother. They began to date and on July 18th, 1981, Phyllis and Jay F Watson were married. She continued her job at the library until retiring in 1984. During the 23 years they shared, Phyllis and Jay enjoyed golf and dancing at the Elks, winter months in Florida and Texas, and spending time traveling to and visiting with family and friends. Jay passed away in August of 2004. In her later years, Phyllis enjoyed knitting prayer shawls, reading voraciously, continuing her card and letter “ministry”, checking on friends, calling her four with the comment, “I just wanted to hear your voice”, walking for exercise, grabbing coffee at McDonald's, and always buying presents in advance from the Avon Lady. Phyllis was preceded in death by her brother, Max, her first husband, Jim Ball, her parents, Arthur and Esta Bryant, her second husband, Jay Watson, her brother, Raymond Bryant and her sister, Marilyn Howard. She is survived by her four children, Kevin (Rebecca) Ball of Newburgh, IN, Chris (Carol) Ball of Charlotte, NC, Tim (Joellyn) Ball of Naperville, IL and Alisa (Doug) Lark of New Albany, IN, 13 grandchildren, 14 great-grandchildren and many nieces and nephews. A memorial service will be held at Federated Church, Saturday, July 31st at 11:30a.m. A luncheon will be held in the fellowship hall afterward. Those planning to stay for the luncheon, please email [email protected] with the number of people attending by July 21st. In lieu of flowers, Phyllis has asked that contributions be made to the American Heart Association or the National Kidney Foundation. You are invited to share memories and condolences online at www.hippensteelfuneralservice.com.

The family of Phyllis Jean (Bryant) Ball Watson created this Life Tributes page to make it easy to share your memories.