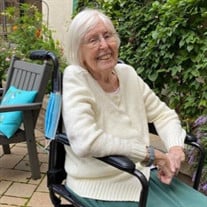 Phyllis Hemmer of Westminster Village in West Lafayette, Indiana and formerly of North Bridgton, Maine, was born on June 29, 1922 in the section of Philadelphia, Pennsylvania known as Roxborough, as the first-born of Lewis and Rhoda B. She grew up there, along with a younger brother Carson James (“Jim”), attending local schools, and graduated from high school in 1939. Temple University awarded her a full four-year scholarship in Education, with a minor in Textiles & Clothing, and she graduated in 1943. She worked for the Pennsylvania Ribbon Company for five years before matriculating at Cornell University to get a master’s degree in the same subject of Textiles & Clothing. Upon graduation in 1949, she accepted a teaching position at Penn State University in State College, PA, but, meeting her future husband that same summer, she taught for only one semester. After a whirlwind courtship of just six months, she married Edgar Hemmer, a Naval Academy graduate and career naval officer and pilot, on December 24, 1949. They have four daughters, Nancy Hyland (Bernard), Carol Nolan (David), Sarah Hemmer, and Janet Drucker (Bruce). She is also survived by three sons-in-law, five grandchildren and six great-grandchildren. As a military family for almost 25 years, the Hemmers moved approximately every two years, living in Corpus Christi, TX; San Diego, CA; Barbers Point, HI; Monterey, CA; West Lafayette, IN; Brunswick, ME; Key West, FL; Washington, DC; and the U.S. Naval Air Station in Newfoundland, Canada. During their second tour of duty in the D.C. area from 1964 - 1967, Phyllis earned a master’s degree in Library Science from Catholic University of America, and worked in the Chevy Chase Public Library until their return to the Midwest. Also, in 1964, they purchased an 1825 Federal-period house in North Bridgton, Maine, which they slowly refurbished, and where they spent 17 summers before moving to a smaller Cape Cod house in the heart of the nearby village. The nearby Long and Crystal Lakes and the relaxed, easy vibe of the Maine Lakes Region afforded them many happy summer memories. When her husband retired from active duty in 1968, due to health issues, they returned from D.C. to the Midwest, where he earned a PhD in Finance & Real Estate at Purdue University’s Krannert School of Management in 1972. When Dr. Hemmer, having secured a teaching position at Wright State University in Ohio, moved the family there in 1972, Phyllis became the Director of School Libraries for the Fairborn, Ohio Schools. She supervised the libraries of one senior high school, 2 junior high schools and 7 elementary schools. When Ed retired from full-time teaching in 1977, they made their primary home for their retirement years in West Lafayette, and Phyllis worked part-time in the Purdue Libraries for several years. When she and Ed moved into Westminster Village in 1996, she volunteered in the in-house library for several years. The Hemmers finally sold the village house in Maine in 2006 and retired full-time to their spacious apartment in the retirement community of Westminster Village. Phyllis transferred to the Assisted Living wing, to a cozy two-bedroom apartment, in the spring of 2018. Mrs. Hemmer was known locally, both in Maine and in Indiana, for her love of books and gardening. She was a voracious reader and an active member of the American Literature Club, which she particularly enjoyed. She and Ed were members of Protestant churches in North Bridgton and West Lafayette, and she was active in various Indiana organizations, including the PEO Sisterhood and Chapter CH. She especially enjoyed being a member of the Faith Presbyterian Church’s choir in West Lafayette. Visitation will be held from 1pm – 2pm Sunday, November 29, 2020 at Hippensteel Funeral Home. Funeral service will begin at 2pm with Reverend Stuart D. Robertson officiating. She will be buried alongside her husband in the family plot in Seymour, IN on Monday, November 30, 2020 at 1pm with Pastor Mike Seaney officiating. Current Covid-19 precautions will be observed along the social distancing. Masks are required. In lieu of usual remembrances, contributions may be directed to the Lafayette Urban Ministry Food Pantry or Food Finders Food Bank. The service will also be webcasted on the Hippensteel website (www.hippensteelfuneralservice.com) where you can also share memories and condolences. http://videos.lifetributes.com/1103924 Please click on the link below to watch the webcast for Phyllis Hemmer. https://webcasts.lifetributes.com/1103960

Phyllis Hemmer of Westminster Village in West Lafayette, Indiana and formerly of North Bridgton, Maine, was born on June 29, 1922 in the section of Philadelphia, Pennsylvania known as Roxborough, as the first-born of Lewis and Rhoda B. She grew... View Obituary & Service Information

The family of Phyllis Hemmer created this Life Tributes page to make it easy to share your memories.