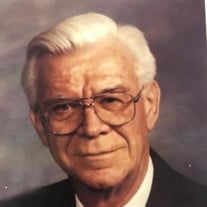 Richard Delos Cupka, Sr., 86, of West Lafayette, died Tuesday, October 5, 2021 at IU Health Hospital, Dolores “Dee”, his wife and best friend, said her final good bye, as Dick went quietly to sleep, with their children Richard Jr., Timothy, and Cynthia at her side. Richard was born in Rensselaer, Indiana on May 26, 1935 to his mother, Rosa Faye (Van-Meter) Cupka, and father William H. Cupka. Raised in Monticello and Medaryville, Indiana, he graduated from Medaryville High School in 1953 and began work as a Telegrapher-Student on the Monon Railroad in his father’s depot at Medaryville. He was soon transferred to the floating extra-board and served in numerous locations in Northern Indiana as Station Agent, Western Union Agent, Towerman, Rail-way Express Agent and Telegrapher. He took leave from the Monon RR and enlisted in the United States Navy in 1954, subsequently serving at duty stations at Bainbridge, MD, Imperial Beach, CA for schooling, one year on Midway Island, and two years in Japan as a Petty Officer CTR2-Cryptologic Technician. He was joined by Dee, his childhood sweetheart whom he married in March of 1956 following his tour of duty at Midway. Their first child Richard Jr. was born in Japan. Upon Dick’s discharge, his family returned to Medaryville. They then moved to Michigan City where Dick became Station Telegrapher at the Monon RR Terminal. In 1958 the family moved again, to Lafayette. Dick enrolled in Purdue’s Industrial Education Department, Supervision Station, majoring in Industrial Training. Graduating in 1962, Dick worked for the Mead Corporation in Chillicothe, OH and was promoted to Mead’s Chicago plant where he functioned as Personnel Manager and Purchasing Agent. He then was employed by Kraft foods, at the Champaign, IL, plant, as Human Resources Manager. In 1965, Dick returned to Purdue to pursue a Masters degree. Graduating in 1967, he became an Assistant Professor and taught for 20 years until incorporating Cupka Corporation. He continued to provide Leader Skills seminars for the next 23 years. His work took him across Canada and to the Bahamas, Bermuda, Belgium, France, Denmark and dozens of US location. He trained thousands of supervisors and pre-supervisory personnel over his 43 years. Before retiring, he focused on training Broadcast Engineers in supervisory, management and executive level positions. While at Purdue, Dick was one of three men who founded the Lafayette Leadership Academy, and after having a debilitating stroke in 1970, he was one of four persons who organized the Lafayette Stroke Club for persons who suffered strokes. Dick retired in 1998, but was asked to come out of retirement to continue training broadcast engineers for the Society of Broadcast Engineers. Fully retiring in 2008, he had trained in excess of 3,200 broadcast engineers in addition to many thousands from business and industrial firms. In retirement, Dick became skilled in wood carving, specializing in Spirit Sticks, and one -of-a-kind Memory sticks. His favorite nickname became “Master Woodbutcher”. Dick is survived by Dee, his wife of 65 years, two sons and a daughter, 12 grandchildren, 11 great-grandchildren, many cousins, nieces and nephew. He is preceded in death by his father, William “Bill”, his mother Rosa Faye, a sister Mary Lula, and his brother, Roger. Visitation will be held from 1pm – 2pm Sunday, October 10, 2021 Hippensteel Funeral Home. Funeral service will begin at 2pm with military honors following by American Legion Post 11. Memorial contributions may be directed to the Honor Guard, c/o Finance Officer, American Legion Post 11, 1801 S 9th St., Lafayette, IN 47905. Share memories and condolences online at www.hippensteelfuneralservice.com http://videos.lifetributes.com/1167721

The family of Richard D. Cupka Sr. created this Life Tributes page to make it easy to share your memories.