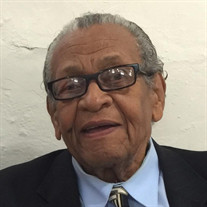 Richard Oliver Womack Sr, 85, a West Lafayette resident since 2001 passed away Sunday, July 7, 2019 at Cumberland Pointe Health Campus. He was born October 22, 1933 in Philadelphia, Pennsylvania to the late George and Ruth (Stokes) Womack. He attended Overbrook High School where he excelled in math, wood working and track and field. Following high school he attended the University of Maryland Eastern Shore. After working for twenty-five plus years with Underwriters Laboratories, Richard retired with pride. After retirement Richard answered a special calling upon his life and soon was a graduate of Eastern Baptist Theological Seminary, St. David, PA. On May 31, 1958 he married Elizabeth Carolyn Wilson in Philadelphia, PA., whom preceded him in death on August 19, 2017. To this union three children were born: Pamela, Richard and Monica. In Philadelphia, Pennsylvania he was a proud member and minister at Vine Memorial Baptist Church for 30 years. Upon the Womack’s relocation to West Lafayette, IN he quickly united with Bethel AME Church where he served until his death. Richard was a jack of all trades. First, he enjoyed meeting anyone, at any time, at the card table to play pinochle. He enjoyed traveling, watching the news and listening to Jazz. He was also a beloved member of the Chancel Players Guild of Lafayette, IN. Richard was the consummate learner. He always wanted to know what, know how, know why, and his age was never going to be an encumbrance. He was continuously up on the latest technology and found any way he could to work with it. And at the age of 82 he taught himself to paint. But most of all Richard loved his family. He especially loved doting on and bragging about his grandchildren: Richard O. Womack III, Alexander Patrick, Courtland L. Keyes, Colin R.P. Keyes and Chelsie and Jasmine Ingram. Richard is survived by his children: Pamela Womack-Gardner of West Lafayette Richard O. (Virginia) Womack Jr. of West Lafayette, Monica W. (Leroy) Keyes of West Lafayette and; sister Marian W. Langdon of Wynnewood, PA, his six beloved grandchildren, several nieces and nephews and a host of relatives, adopted family and friends. Along with his wife Elizabeth, he is preceded in death by his parents, his sister Naomi and three brothers Thornton, Jesse and Donald Womack. Visitation will be held from 9am – 12pm on Saturday, July 13, 2019 with funeral service at 12pm at Living Truth of Christ Church -1418 South 24th Street, Lafayette, IN. Reverend Pamela Jones - Horne and Reverend Wesley Campbell will officiate. In lieu of usual remembrances, contributions may be directed to Bethel AME Church, Lafayette, IN. Share memories and condolences online at www.hippensteelfuneralservice.com

The family of Richard Oliver Womack Sr. created this Life Tributes page to make it easy to share your memories.