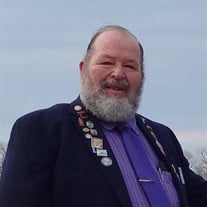 Robert E. “Bob” Jansen, 75, of Lafayette passed away Monday, September 21, 2020 at IU Health Hospital. Bob was; “In magnificent shape for the shape he was in.” He was born March 6, 1945 in Lafayette to the late John L. and Clara Mary (Obermyer) Jansen. He was a 1963 graduate of Central Catholic High School before attending Ivy Tech. Bob worked as a Maintenance Supervisor for the Indiana Veteran’s Home for 31 years before retiring in March of 2008. On May 1, 1971 he married Sandra M. Fassnacht in Lafayette and she survives. Bob was in the Civil Air Patrol for 21 years. He was a member of St. Lawrence Catholic Church, life member of the Eagles Lodge, past Exalted Ruler of Lafayette Elks and Frankfort Elks, past District Department and Exalted Ruler of Elks West District, and State Chairman of the Elks State Veteran’s Committee. He participated in the historic reenactment of the French and Indian War from 1988 – 2012, including the Feast of the Hunters Moon, Kohkomah-Foster and many others in the Midwest and Nova Scotia. Bob was proud of the fact that he’d been in all of our 50 states, 48 of them 2 or more times. He had driven to and through all of the lower 48. He flew to Hawaii in 1983 to attend an Elks Convention. In the summer of 2013, he flew to Alaska for a 12-day tour, and in 2016 the family took a 7-day cruise to Alaska. Bob had traveled to four Canadian Providences and northwestern Mexico. He and Sandra hosted foster children for many years and later foreign exchange students from different countries. Along with his wife, Sandra, he is survived by his children: Rebecca Lynn Clevinger of Lafayette, Mariclair (Will) Simmons of Granger and John William Jansen of Carmel; siblings: Catherine Williams of Lafayette and George (Betty) Jansen of Mount Dora, FL; sister-in-law Joan Jansen of Florida and brother-in-law Thomas Brown of Urbana, IL. He is also survived by two grandchildren: John William Alexander “Alex” Simmons and William Ralph Simmons IV. He is preceded in death by three siblings William Jansen, Rosemary Brown and Paul Jansen; and brother-in-law Edward Williams Funeral Mass will be held Friday, October 2, 2020 at 11 AM at St. Lawrence Catholic Church in Lafayette, IN. A Celebration of Life will take place at the family home on Saturday, October 3, 2020 from 3PM - 5PM. In lieu of usual remembrances, contributions may be directed to the Lebanon Elks Cancer Fund Lodge #635 or Elks State Veteran’s Fund. Share memories and condolence online at www.hippensteelfuneralservice.com

The family of Robert "Bob" Jansen created this Life Tributes page to make it easy to share your memories.