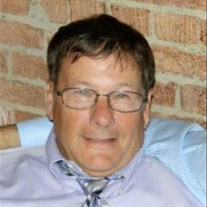 Robert P. Hicks (Bob), 69, of Lafayette, died June 27th, 2019, at Franciscan Health hospital surrounded by his loving family. Bob had been battling cancer and died of complications of Soft Tissue Sarcoma. Bob was born in Syracuse, New York, in 1950 to Charles and Ruth (Muller) Hicks. He married Sarah Kimbrell at First Baptist Church of Lafayette in August of 1970. He graduated Purdue University in 1975. He served 38 years as a teacher, most notably at Southwestern and Wea Ridge Middle Schools. He was also Athletic Director, which fed his never-ending interest in sports. Bob played many roles in service to Lafayette and the state. Governor Otis R. Bowen, M.D., recognized Bob as a “Sagamore of the Wabash” in October of 1976 for service to the state of Indiana. He served as the Tippecanoe County Republican Party Chairman for 6 years beginning in 2007. He also managed the election campaigns of many local candidates. He was known to some as “C.B.”, short for “Campaign Bob.” He and Sarah loved to travel and spent several weeks each year at the family camp in Wanakena, New York. Friends in Wanakena were more like family, and it was his unfulfilled hope to go there one more time. Time on the beach with the family in Hilton Head Island, South Carolina, was an annual favorite. And, he and Sarah went to Hawaii in 2016 for a memorable trip. Above all, Bob treasured his time with family. He had three children, Kelly and her husband, Ryan Gerding, of Lee’s Summit, MO. Kevin, and his wife Cindy, of Valparaiso, IN. Ryan, and his wife Amber, of Lafayette. Bob was so proud to be grandpa to seven grandchildren. Kelly and Ryan have three children: Jack, Kyle and Nick. Kevin and Cindy have four: Avery, Carson, Xavier and Maddie. And the family often jokes that he’s grandpa to seven granddogs as well. His pride in Avery’s enrollment at Purdue, Jack’s scholarship at Pepperdine, and Carson’s shared interest in seeing historical places made him happy. Kyle plays football and baseball, and he loved to text Kyle about his games. Nick loves to fish, so Bob took him fishing – in January in Missouri! Xavier loves to ask Bob questions, and he loved to talk. Maddie calls him GrandBob, and he called her Bobbette. He will live on in the legacy of his wonderful family. Along with his wife, Bob is survived by two brothers, John (Tammy) Hicks of Swayzee, IN, and Bill (Charlotte) Hicks of Indianapolis. Friends may call 5-8 p.m. Monday, July 1, 2019 at Hippensteel Funeral Home. Service will be held at 10 a.m. Tuesday, July 2, 2019 at the funeral home. Ryan Gerding officiating. Share memories and condolences online at www.hippensteelfuneraLservice.com The family asks that memorial donations be made to the Tyler Trent Cancer Research Endowment, c/o Purdue Center for Cancer Research, 201 S. University St., Hansen Bldg, Room 100, West Lafayette, IN 47907. http://videos.lifetributes.com/1009236

The family of Robert P Hicks created this Life Tributes page to make it easy to share your memories.