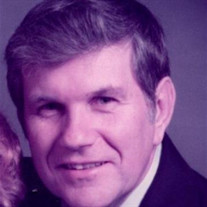 Robert Nelson Hurst, 88, of West Lafayette passed away Tuesday, April 30, 2019 at 2643 Willow Drive. He was born May 21, 1930 in Ogden, UT, to the late Ernest A. and Lydia V. (Nelson) Hurst. On May 24, 1949 he married the love of his life Phyllis Hale in Salt Lake City, Utah. She preceded him in death on December 26, 2011. Robert proudly served his country in the United States Air Force working in the Russian Linguist Security Service from 1951-1955 in San Diego, Boston, and Nome. After his time in the service, he went on to obtain his Bachelor’s Degree from the University of Utah. He then continued his education graduating from Harvard University with his Master’s Degree and Purdue University with his PhD. He was a Professor of Bio-Sciences at Purdue University for 30 years before retiring in 1993. Prior to Purdue, Robert taught at Manitoba University and also Ivy Tech. Upon his retirement he taught another two years for the University of Kentucky. He was a member of the Church of Jesus Christ of Latter-Day Saints. Robert is survived by his children: daughter Michelle Brooks of West Lafayette; 3 sons: Robert M. Hurst (wife: Neffie) of Tamaha, OK, Randall J. Hurst (wife: Sandy) of Papillion, NE, and Corydon L. Hurst (wife: Melissa) of Granger, IN; one foster daughter: Zenaida Fawson (husband: Ken) of Fountain Valley, CA; one sister Shirley Garner of Ogden, UT;. He is also survived by 18 grandchildren and 40 great-grandchildren. Along with his wife Phyllis, he is preceded in death by his parents and one brother, E. LarVar Hurst of San Diego, CA, and one great grandson, Robert Riley Brooks. Throughout much of his life he enjoyed hunting and fishing, and he absolutely loved to travel. His favorite experience was a sabbatical year spent in the Philippines with his family while working for the International Rice Research Institute. Robert was known for his kindness and self-sacrificing nature. He served as a bishop and in many other roles that allowed him to provide for his fellow man. His family and friends knew his love for them was unwavering, as his focus in life was on making them happy. Visitation will be held from 11:30am – 1pm Monday, May 6, 2019 with funeral service immediately following at the Church of Jesus Christ of Latter-Day Saints, 3224 Jasper St., West Lafayette. A private family burial will follow at Tippecanoe Memory Gardens. Hippensteel Funeral Home entrusted with care. Share memories and condolences online at www.hippensteelfuneralservice.com

The family of Robert Nelson Hurst created this Life Tributes page to make it easy to share your memories.