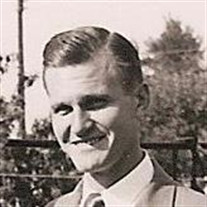 Robert John Krackenberger April 20, 1925 to July 24, 2019 Robert "Bob" Krackenberger, 94, of West Lafayette (formerly long-time resident of Indianapolis) passed away July 24, 2019. He was a proud employee of Creative Packaging (division of Eli Lilly) for many years. Bob served in the Army/Air Force, the Flying Tigers (308th Bomber Group, Burma campaign) during World War II. He was married for 61 years to the love of his life, Iris. Family meant so much to him, and Bob was so pleased with the accomplishments of each member of his family. Late in life, he delightedly acquired a smart phone and sent many loving and interesting texts to his family. He enjoyed fishing, telling stories, restoring clocks, tinkering in his workshop and traveling. Bob is survived by his daughter, Linda Brennan, and her husband Paul; his granddaughter, Andrea Brennan; and his grandson, Joe Brennan, and Joe’s wife, Kira. He was preceded in death by his wife, Cecile Iris (Ham) Krackenberger; sisters, Ruth Davis and Angela Chasteen; and parents Leo and Veronica Krackenberger. Visitation will be from 5:00 to 8:00 pm on Friday, July 26, at Hippensteel Funeral Home, Lafayette. A graveside service with military honors, will be held at Calvary Cemetery, 435 W Troy Ave, Indianapolis, IN, at 11am on Saturday, July 27. Memorial contributions may be sent to the American Cancer Society. Share memories and condolences online at www.hippensteelfuneralservice.com http://videos.lifetributes.com/1014180

The family of Robert "Bob" Krackenberger created this Life Tributes page to make it easy to share your memories.