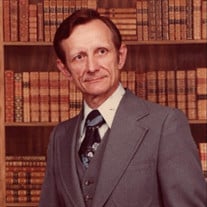 Dr. Robert E. Lempke, Sr., passed away Wednesday, September 30, 2020, at his home. He was born on November 26, 1924, to the late Paul R. and Beatrice (Harford) Lempke in Dover, New Hampshire. His birth date was officially recorded as the 27th (Thanksgiving Day). Bob proudly served in the United States Army during World War II through an Army specialized program that allowed him to go to the University of New Hampshire and Washington and Lee University and graduate from Yale School of Medicine. On the Yale University tennis courts he met his future wife, Mary (Baker) Lempke, who was there studying for her master’s degree in nursing. They married on June 5, 1949, in the Yale University Chapel in New Haven, Connecticut, after his internship at the John Hopkins Hospital. Bob moved with his new wife to Indianapolis for his surgical residency. There he was a general surgeon at the Veterans Administration Hospital and eventually became Chief of Surgery and Director of Research. He also practiced at Indiana University School of Medicine where he was a Professor of Surgery. During the Korean War, Bob served as First Lieutenant of Medicine at Fort Knox Army Medical Research. He was deployed to Japan for 6 months where his team developed what is now the standard treatment for frostbite. After his service in the Army, Dr. Lempke returned to his positions in Indianapolis until retiring in 1993. In 1964, Dr. Lempke joined a group from IU School of Medicine working with the U.S. Agency for International Development as a visiting professor of surgery for 18 months in Karachi, Pakistan, developing a post-graduate training program in surgery at Jinnah Hospital. He moved to West Lafayette in June 2000. Bob was also a dedicated artist focusing primarily on painting with oils and acrylics with landscapes, people, and animals as subjects. He also enjoyed tennis, ballroom dancing, and woodworking. Dr. Lempke is survived by four children: Robert Lempke, Jr., of West Lafayette, Martha Lempke of West Lafayette, Paul D. (Susan) Lempke of Chicago, IL, and Kari Lempke of West Lafayette. In addition, Bob is survived by five grandchildren and five great-grandchildren. Bob is preceded in death by his parents, wife, Mary, and two siblings: Paul H. Lempke and Bette Hopkins. Per Dr. Lempke’s request, there will be no services at this time. Hippensteel Funeral Home entrusted with care. Please share memories and condolences online at www.hippensteelfuneralservice.com

Dr. Robert E. Lempke, Sr., passed away Wednesday, September 30, 2020, at his home. He was born on November 26, 1924, to the late Paul R. and Beatrice (Harford) Lempke in Dover, New Hampshire. His birth date was officially recorded as the 27th... View Obituary & Service Information

The family of Dr. Robert Lempke Sr. created this Life Tributes page to make it easy to share your memories.