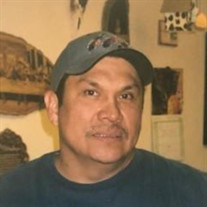 Ronald J. “Ronnie” Davenport, 59, of Wren, OH, passed away Sunday, October 24, 2021 at his home. Ronnie was born December 13, 1961 in Petoskey, MI, to the late Richard Davenport and Beatrice (Gasco) Bolyard. He graduated from Bellmont High School in Decatur, IN, where he ran track and played football, setting records in yards gained and scoring. After graduation, he proudly served his country in the United States Army. Ronnie lived in Colton, CA for 30 years before moving back to Lafayette in 2019. While living in California, he worked in manufacturing for US Tile for over 25 years. Ronnie was a member of the Little Traverse Bay Bands of Odawa Indians. He enjoyed fishing, collecting antiques and watching the Minnesota Vikings play football. Surviving is son Aron Davenport of Bar Nunn, WY; siblings: Cynthia Schweiger of West Lafayette, Elroy Davenport (Missy) of Lafayette, Brenda Spikes of West Lafayette, half-sister Karen Kaleta of Michigan, and step-brother Bart Bolyard of Lafayette; and step-father Richard Bolyard of Lafayette. He is also survived by several nieces and nephews, as well as great-nieces and nephews. He is preceded in death by his parents and a half-brother, Joseph Davenport Petoskey. Memorial visitation will be held from 1:30 p.m. – 2:30 p.m. Friday, November 12, 2021 at Hippensteel Funeral Home. Memorial service will begin at 2:30 p.m. Inurnment to follow at Meadow View Cemetery. Share memories and condolences online at www.hippensteelfuneralservice.com http://videos.lifetributes.com/1174354

The family of Ronald "Ronnie" Davenport created this Life Tributes page to make it easy to share your memories.