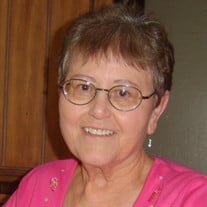 Rosalie Evelyn (Leill) Nuckols, 82, of Arizona passed away March 11, 2021 in Chandler, Arizona under hospice care after a long battle with dementia. Rosalie was born July 7, 1938 in Lafayette, IN to the late Raymond Leill and Mabel Goddard Leill. Rosalie was a graduate of Lafayette Jefferson High School in 1956. She excelled at music and typing and worked at Indiana Public Service and Ross Gear after high school. She met her husband B. Edward “Ed” Nuckols, a Purdue University student from Dunkirk, IN, in 1960 at Schuyler Avenue Wesleyan Church where they both attended and where Rosalie played the organ and directed a Teen Chorale. They married on July 22, 1962 on a hot summer day with so many people in attendance there was standing room only! She and Ed had two children – Christopher Edward and Cheri Lyn – and remained in Lafayette until 1974 when they moved to Tempe, Arizona. Rosalie used her exceptional musical talent as a pianist and organist to play for dozens of weddings and funerals and served as church organist at Tempe Nazarene Church for many years for which she received a Distinguished Service Award in 2005. She worked as a secretary at Carr Mortuary and at Arizona State University School of Music in Tempe, AZ from where she retired in 1990. Rosalie learned to play the piano at a young age and was thrilled to get to go backstage to meet her musical inspiration, Liberace, when he performed a concert at Phoenix Symphony Hall in the early 1980s. When Rosalie was not busy playing music, she loved watching TV, going to the mall and being with her family. Although she lived in Arizona most of her life, her heart and “home” were always in Indiana. Rosalie was struck with polio in 1944 at the age of 6 and endured many surgeries and struggles over the years. She was always proud of the fact that although she had fallen many times in her life she had never once broken a bone! She showed incredible strength and fortitude in dealing with her disability and was always coming up with creative adaptions so she could be as independent as possible as she never wanted to be seen as different from anyone else. We celebrate that she is now completely healed and whole and running around Heaven with new legs! We are especially grateful to the loving care provided by Cecilia, Joseph, Zeny, and Russell at Ana's Haven. Along with her husband, Ed, she is survived by her two children Christopher Edward Nuckols of Dallas, TX and Cheri Lyn (Steve) Rednour of Chandler, AZ; grandchildren Kaitlyn (Billy) Johnson of Oakland, CA, Justin Nuckols of Scottsdale, AZ and Lauren Brown of Gilbert, AZ; and two sisters: Joan Jenkinson of Lafayette and Marcia (Mike) Raisor of Lafayette. She is preceded in death by her parents and siblings Raymond “Bud” Leill of West Lafayette, Barbara (Larry) Rudder of Lafayette, IN and Richard Leill of Lafayette, IN. Visitation will be held 10-11am Thursday, March 18, 2021 at Hippensteel Funeral Home, Lafayette, IN. Service will be held at 11am Thursday at the funeral home. Interment will follow at Tippecanoe Memory Gardens in West Lafayette, IN. Current Covid-19 precautions will be observed along with social distancing. Masks are required. Friends and those out of town are invited to watch a live webcast of the funeral service that will be available on our website under Rosalie's obituary. A Celebration of Life will be held in Chandler, Arizona on March 28th. In lieu of flowers, donations can be made to Hospice of the Valley at www.hov.org. Share memories and condolences online at www.hippensteelfuneralservice.com https://webcasts.lifetributes.com/1126841

Rosalie Evelyn (Leill) Nuckols, 82, of Arizona passed away March 11, 2021 in Chandler, Arizona under hospice care after a long battle with dementia. Rosalie was born July 7, 1938 in Lafayette, IN to the late Raymond Leill and Mabel Goddard... View Obituary & Service Information

The family of Rosalie Nuckols created this Life Tributes page to make it easy to share your memories.