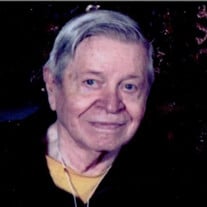 Stanislaus (Stan) Edward Seretny died January 9th, 2021 at the Westminster Village Healthcare Center. Stan, the younger of two sons, was born November 29th, 1927 to Michael and Mary (Naciuk) Seretny in New Haven, CT. Stan left for a Polish Alliance boarding school, in Cambridge Springs, PA, in the 7th grade and earned both a High School diploma and an associate degree in Tool and Die Making. He chose Purdue University over Cornell and matriculated in 1948 studying Mechanical Engineering. He was inducted into the Pi Tau Sigma National Honorary and became an alumnus of the “infamous’ Class of 1950 at Purdue University. Stan met the love of his life while at Purdue University. After both graduated in 1950, he and Lois were married on November 22nd, 1951 in Columbia City, Indiana (the hometown of his bride). Between New Jersey and Indiana, they raised three sons, and spent the majority of their family life in Indianapolis, Indiana. Stan was a lifelong member of St. Lawrence Catholic Church until his retirement. After retirement, they traveled and ultimately relocated back to the campus they both loved in West Lafayette, Indiana. Stan was employed for 38 years as a Design Engineer for residential telephones at Bell Telephone Laboratories, first in Murray Hill, New Jersey and then at the BTL division at the Western Electric Complex built in Indianapolis. He collaborated with Henry Dreyfuss and subsequently with Donald M. Genaro on the physical designs of each AT&T residential phone from 1954 to 1989. He was the proudest of his design of the Trimline Handset which was produced at Western Electric in Indianapolis. Stan was a Junior Achievement Advisor for the Indianapolis Western Electric Branch, and a Society of Plastic’s Engineer’s Undergraduate Advisor to both Purdue University and Ball State University. He retired in late 1989 as a Distinguished Member of the Technical Staff having served the last 5 years of his career in Hong Kong and Singapore. An avid golfer, he played in the St Lawrence Golf League until his knees prevented walking the courses. Always active in sports as a youth, he coached Indianapolis Youth Hockey for his two younger sons. He was the Institutional Representative for Troop 427 of the Boy Scouts of America and the motivating force for the Eagle attainment of all three of his sons. Stan devoted many years to Catholic Scouting in the Archdiocese of Indianapolis working with Fr. John Ryan and Mark Svarczkopf. He was a standing member of the Board of Review for the Ad Altare Dei Catholic Scouting Award. In 1971, he was awarded the St George Medal for his contributions to the spiritual development of Catholic Scouts. He was also a wonderful mentor for science education and involved in the Indianapolis Regional Science Fairs as proud father and later a judge. Stan and Lois were both life-long ardent supporters and alumni of Purdue University. Stan was a lifelong member of the John Purdue Club, and a founding member of the President’s Council. Stan’s proudest accomplishment came in October 20th, 1990 with the construction and dedication of the Class of 1950 building at Purdue University, a Class project along with his fraternity brother, and Class President, Mr. James F. Blakesley. He and Lois are memorialized on the first floor of that building Stan lost his beloved wife, Lois, of 63 years marriage, on October 3, 2015 in the Health Center at Westminster Village. Stan is survived by three sons: Dr Michael Seretny of West Lafayette, IN. Mr. Andrew W. Seretny of St. Mary’s Georgia, and Mr. Stanley J. Seretny and (Janni Glover) of Lafayette, IN. The family would like to publicly express our sincerest Thank You for the exceptional care and compassion of the staff at both Westminster Village Health Center and the ViaQuest Hospice. I am proud to have walked my eldercare journey with both parents and these fine nurses and staff members. Following the wishes of his wife, there will be a joint Mass of Christian Burial at St Thomas Aquinas Center at Purdue University. Pending the pandemic, they will be interned together in the family plot, with his parents and brother, at Beaverdale Cemetery in Hamden, Connecticut. Please share memories and condolences online at www.hippensteelfuneralservice.com

The family of Stanislaus (Stan) Edward Seretny created this Life Tributes page to make it easy to share your memories.