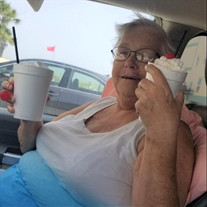 Tamara R. (Weber) Clawson, 71, formerly of Lafayette, passed away at 7:09am on September 19, 2019 at her home in Frankfort, KY. She was born October 23, 1947 in Fort Wayne, IN. Her first husband Robert Wade passed away in 1970. On February 12, 1972 she married Paul (JR) Clawson. He preceded her in death on March 28, 2014. Tami lived in Lafayette and Brookston area before moving to Frankfort, KY. She worked for 20 years as an Assistant Manager for Bridgeport Cafeteria. Prior, she and her husband owned JR’s Grocery when they lived in Kentucky. She also worked for CTS Corp and Central Lab, Midwest Management and Park-N-Eat. She was known for her kindness and always being there for people whether they needed someone to talk to or food in their belly. She often took care of kids making sure they had everything they needed. Tami is survived by her children: Paul “Eddie” (Elsie) Clawson of IL, William “Bill” Clawson of Carrolton, KY, Shawn (Jeff) Hillard of Lawrenceburg, KY, Anthony McManaway of Lafayette and Melissa (Carlos) Wiley of Frankfort, KY; siblings: Debbie Davis (Bill Carrol) of St. Anns, IL, Sondra Clawson of Lafayette, Penny (Gary) Slopsema of Lafayette, Ed “Bud” (Kathy) Menzie of Lakeland, FL, Clayton (Karla) Teboe of Crestview, FL, Charlotte (Ted) Bell of Atlanta, IN, Jackie (Ronnie) Chapman of Russellspring, KY, Katrina (David) McShan of Indianapolis, IN, Verna (Frank) Insko of Sheridan, IN, Polly (David) Dill of Greentown, IN and Burl “Bud” Teboe, Tipton, IN. She is also survived by 10 grandchildren and 16 great-grandchildren. Along with her husband, JR, she is preceded in death by her parents Ralph and Nelda Weber and Clayton and Clementine Teboe, sisters: Margaret Munday and Tara Teboe and brothers Charles Teboe and Robert Uhrick. Visitation will be held from 5pm – 8pm Monday, September 23, 2019 at Hippensteel Funeral Home. Funeral service will take place 10am Tuesday, September 24, 2019 at the funeral home with Reverend Garry Bryant. Interment to follow at Tippecanoe Memory Gardens. Share memories and condolences online at www.hippensteelfuneralservice.com http://videos.lifetributes.com/1025176

The family of Tamara Clawson created this Life Tributes page to make it easy to share your memories.