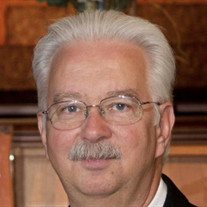 Terry Lee Watkins, 69, of Lafayette passed away Friday, February 5, 2021 peacefully at his home. He was born September 27, 1951 in Lafayette, IN to Eugene and Marie (Brown) Watkins. Terry was a Lafayette Jefferson grad in 1970. He worked for the Indiana Pacers for 25 years at Market Square Arena and Conseco FieldHouse. Terry also worked at Caterpillar as a security office for seven years. However, his true passion was music. He was a drummer in various groups including George Graves and South, Wayne Fisher and the Country Hightones, as well as The Bodacious Band who won Q95’s Homegrown Album Award with the song Hot Days and Cool Nights. Terry was a member of Christ United Methodist Church. He enjoyed spending time with family and friends. Of all of these though, his 3 grandchildren were his pride and joy. On October 12, 1991 he was married to Jayne Hege in Lafayette, IN and she survives. He is also survived by his brother Timothy C. Watkins (wife, Glenda Sisson) of France, his daughter, Suzanne LaVassaur Duris (husband, Philip) of Huntington Beach, CA, and 3 grandchildren, Madeleine, Graeme, and Penelope Duris. He is preceded in death by his parents, Eugene and Marie Watkins. Visitation will be held from 5-8pm Monday, February 8, 2021 at Hippensteel Funeral Home. Reverend Kurt Freeman will be conducting his celebration of life Tuesday, February 9 at 10am at Christ United Methodist Church; 3610 S. 18th St. Lafayette, IN 47909. Interment will follow at Springvale Cemetery. Current Covid19 precautions will be observed along with social distancing and current government attendance guidelines. Masks are required. A live webcast of the funeral service will be available on our website; www.hippensteelfuneralservice.com. In lieu of flowers, memorial contributions may be directed to the Community Cancer Network. Share memories and condolences online at www.hippensteelfuneralservice.com Click on the link below to watch the webcast for Terry Lee Watkins. https://webcasts.lifetributes.com/1119239

Terry Lee Watkins, 69, of Lafayette passed away Friday, February 5, 2021 peacefully at his home. He was born September 27, 1951 in Lafayette, IN to Eugene and Marie (Brown) Watkins. Terry was a Lafayette Jefferson grad in 1970. He worked for... View Obituary & Service Information

The family of Terry Lee Watkins created this Life Tributes page to make it easy to share your memories.