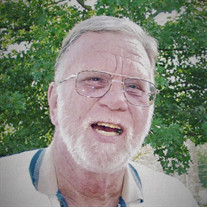 William “Bill” Carmichael, 73, of Mulberry passed away Wednesday, October 21, 2020 at Mulberry Healthcare. He was born December 28, 1946 in Crawfordsville, IN, to the late Lloyd and Elizabeth (Peffley) Carmichael. Bill graduated from Ladoga High School before attending Indiana University where he obtained his Bachelors degree and later his Masters in Social Work. He was a licensed clinical social worker in 1993. He worked for the Wabash Center in Lafayette for more than 34 years. He proudly served in the United States Marine Corps from 1964-1965. On June 26, 1982 he married Barbara Powell in West Lafayette and she survives. Bill loved his job and was often recognized for the work he did in the community. He was voted Social Worker of the year in 1995. He received the Distinguished Citizen Award from Tony Roswarski in 2011, he was recognized with the Wabash Center by John Dennis in 2011 and the Governor’s Distinguished Service Medal from Governor Mitch Daniels in 2011. He was very active in the Lafayette community. He was a member of Family Services, NAMI Association, LARA, AND THE NASW. He was also a member of the American Legion. He enjoyed woodworking, reading and playing Santa at the Wabash Center. He was an avid sports person and enjoyed NASCAR. Along with his wife, Barbara, he is survived by his children: Patrick Elliott, Wendy Stansbury and Susanne (Jeff) Bulington. He is also survived by five grandchildren. He is preceded in death by his parents. Private family service to take place. Share memories and condolences online at www.hippensteelfuneralservice.com

William &#8220;Bill&#8221; Carmichael, 73, of Mulberry passed away Wednesday, October 21, 2020 at Mulberry Healthcare. He was born December 28, 1946 in Crawfordsville, IN, to the late Lloyd and Elizabeth (Peffley) Carmichael. Bill graduated... View Obituary & Service Information

The family of William "Bill" Carmichael created this Life Tributes page to make it easy to share your memories.