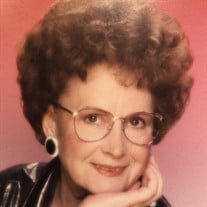 Wilma Delores (Dee) Carrel, 90, passed away Wednesday, June 10, 2020 at IU Health Arnett. She was born November 2, 1929 in Clinton, IN, to the late Arthur and Laura (Cox) Jones. On August 28, 1948 she married Joseph J. Carrel in Clinton, IN. He preceded her in death on August 28, 1989. After raising three children and supporting her husband’s attainment of his PH.D., Wilma returned to college in her early 40s and earned a bachelor’s degree in Accounting, later becoming a CPA. Wilma was an avid supporter of Purdue football and basketball, followed the Indianapolis Colts, Chicago Bears, Denver Broncos and New Orleans Saints. She was a talented quilter, leaving a legacy of beautiful quilts to family and friends all over the country. She was known as a fierce competitor in gin rummy, a voracious reader, loved her multiple gardens and flowers, and fished well into her 80s. She also greatly enjoyed her trips to multiple casinos across Indiana and Michigan. Surviving are her sons Joseph Carrel II (Kathleen) of Indianapolis and Mark Carrel (Heather) of Westfield, IN; siblings: Donna Price of Covington, IN, Mike Jones of Stamford, CT, and Sharon Cousey (Fred) of Vicksburg, MS. She is also survived by 9 grandchildren, 22 great grandchildren and 4 great, great grandchildren. Along with her husband Joseph, she is preceded in death by her parents, daughter Laura Spicer, and five siblings: Doyle Jones, JoAnn Gosnel, Roger “Corky” Jones, Carol Smith and Robert “Bob” Jones. A Private Graveside service will be held at Spring Vale Cemetery. In lieu of usual remembrances, contributions may be directed to Food Finders Food Bank in Lafayette. Share memories and condolences online at www.hippensteelfuneralservice.com

The family of Wilma Delores (Dee) Carrel created this Life Tributes page to make it easy to share your memories.