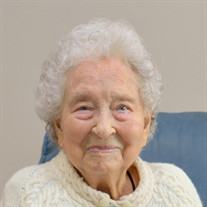 Winifred P. Bauman was born on October 25, 1924, in Carlinville, Illinois to the late Charles and Marjorie Peebles. She died at the incredible age of 95 on June 24, 2020. Winifred grew up with one beloved sister, the late Mildred Odle. Their age separation of six years made Winifred determined that her children would have sibling playmates closer in age. After graduating with a degree in Education from the University of Illinois she married her loving husband, Dr. Loyal F. “Pete” Bauman (deceased, 1987), on September 28, 1947. They welcomed five children in six years. They were wonderful parents and taught them to be independent and adventurous. After their children were raised, Winifred and Loyal loved traveling the world, playing cards, and the outdoors. Winifred’s adventurous spirit led her to take up downhill skiing in her late 50s and was known to zip down the mountain faster than her adult children. Winifred passed on her love for cards, especially bridge. She taught two generations of kids how to play and never just let them win--instead hooting in good fun when anyone made a competitive play. Winifred continued sharing her love for card games well into her late-life with friends at Westminster Village in West Lafayette where her strength and independence was supported by her caregivers. Winifred was a devoted member of Trinity United Methodist Church. She volunteered at the West Lafayette Public Library and was a member of the Home Extension Club and Purdue Agronomy Wives. She was a talented seamstress, sewing suits for her husband and almost every garment her children wore. Winifred will be dearly missed by all who knew her. Winifred and Loyal had five children, ten grandchildren and ten great-grandchildren: Robert Bauman (Mary Alice), grandchild Mark McKee (Courtney), great-grandchildren, Ben and Grayson, grandchild Sarah Ricci (Cliff), great-grandchildren, Vivi and Maggie, grandchild Allison Bauman; Leslie Bauman (Boyd Gatlin, deceased), grandchild Amanda Gatlin (Jeff Layton), great-grandchildren, Ian and Nolan; Ronald Bauman (Suzanne), grandchild, Amy Asleson (Mike), great-grandchildren, Maya and Piper, grandchild Wesley Bauman (Gabby), great-grandchildren, Kelli and Lily; Stephen Bauman (Diane), grandchildren, Chad and Lydia; Sandra Bohl (David), grandchildren, Sara and Adam. She was preceded in death by her sister Mildred Odle. Private graveside services will be held July 2, 2020, and a remembrance event will be held at a later date. In lieu of flowers, memorials may be made to the Loyal Bauman scholarship fund at Purdue University (Agronomy Department, 915 S. State St., West Lafayette, IN 47907) or Trinity United Methodist Church (404 N. 6th Street, Lafayette, IN 47901). The family would like to express their heartfelt thanks to the caregivers at Westminster Village Care and Home Instead who supported Winifred’s independence. Share memories and condolences online at www.hippensteelfuneralservice.com

Winifred P. Bauman was born on October 25, 1924, in Carlinville, Illinois to the late Charles and Marjorie Peebles. She died at the incredible age of 95 on June 24, 2020. Winifred grew up with one beloved sister, the late Mildred Odle. Their... View Obituary & Service Information

The family of Winifred P. Bauman created this Life Tributes page to make it easy to share your memories.